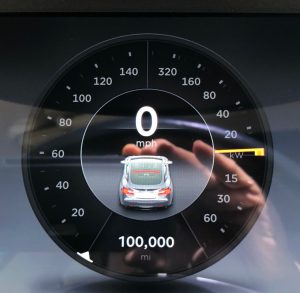 Wow, it’s been a while since my last update. Life has been busy and, until recently, relatively quiet on the Tesla living front. Now I have a few new things to write about so let’s get to it.

My premise going into the Model S was that it would be roughly equivalent in total cost of ownership to my prior car, a 2007 Acura MDX after about 7 years of ownership. That speculation has led to almost 400K views over on Quora and a lot of discussions.

With detailed records for my first 100K miles on both cars, it’s time to see how things are looking and speculate on where we end up.

I bought my 2007 Acura MDX new and drove it to 200K miles before handing over to my daughter who added another 40K miles before it was time to let it go. While people may argue with the prudence of this, I had the dealer I bought it from service it from the beginning to the end and did all the recommended maintenance on it.

The Acura was a good comfortable car and had features that my Tesla (and even newer ones) still don’t have but it was also inferior in many ways.

Here are the costs for those first 100K miles on the Acura:

My thought process was to compare the Model S decision vs buying another Acura MDX, so the 2014 Acura specs were:

Excluding the insurance (more on that later), the total cost of ownership for the 100K miles would have been $67,044.

I bought my 2014 Telsa Model S 85 in April 2014 before the Autopilot and AWD days. Like the Acura, I tracked the mileage and service costs.

Here are the costs for those first 100K miles:

The insurance on my Model S was actually less expensive than the Acura so I’ve left that out of the considerations. Also, the lost utility of the money between the Tesla price vs the Acura price isn’t accounted for (interest etc).

My cost of ownership for the first 100K miles on the Tesla was $40,000 more than it would have been had I just bought another Acura MDX.

While service costs were lower than the Acura, they were not significantly lower. This is partly explained by the cost of the tires on the S vs the MDX and the need to have both Winter and Summer tires (no AWD) on my S which led to less life on one of the sets of tires. Another surprise was that large non-mechanical items (dash display) failed during the period which also significantly impacted the expense.

While there were significant savings in going electric vs gas, it was not the same level of savings that you see quoted or discussed online — it was about 50% less expensive for the energy to drive the Tesla versus an MDX. This is explained by a few things:

Energy costs were 50% of an ICE car

Would it ever make sense?

I have the benefit if knowing how service costs changed on the MDX for the next 100K miles. Average service costs per mile climbed from $0.05/mile to $0.09/mile on the Acura as many of the ICE-type parts wore out etc. The car was quite driveable for the entire time but it was getting a lot more expensive to keep on the road.

I don’t have personal experience on the Tesla’s longer-term maintenance, and, while the promise is that it would hold up better for longer, it’s not something that I can prove to myself despite a few data points that it does well.

And, of course, I’m comparing a 7 (adult) seating SUV vs the 5+2 Model S. Had I gone with an ICE sedan as a comparison the gap would have been worse.

Back in 2014, I managed to convince myself that getting a Tesla was a good idea and, while I have no regrets about making that decision, it wasn’t a great financial decision for a number of reasons.

The Model 3, with a lower initial cost and updated battery technology, has a better chance at breaking even over a longer term, but from my experience, I think it will still be a tough call, especially if compared against cars in a similar class.

While the financial aspect of owning the Model S wasn’t necessarily the best move, there were all sorts of other benefits that are hard to quantify that have made it a memorable experience.

I created sites like EVTripping.com, worked on great products like TezLab and learned a lot of new technologies along the way which helped me grow personally and professionally.

The Model S and the community were also good anchors through some rough years on a few different fronts in ways that a “normal” ICE car/decision wouldn’t have been.

Is buying a Tesla a great financial decision? No.

Is it a good idea anyway? It was for me without a doubt.

This site uses Akismet to reduce spam. Learn how your comment data is processed.

If you're interesting in purchasing a new Tesla you can get 1,000 miles of free supercharging by starting this link: http://ts.la/rob6663.

Note that the link will open the Tesla Design Studio and the discount will be applied. Using the referral helps to support this site.